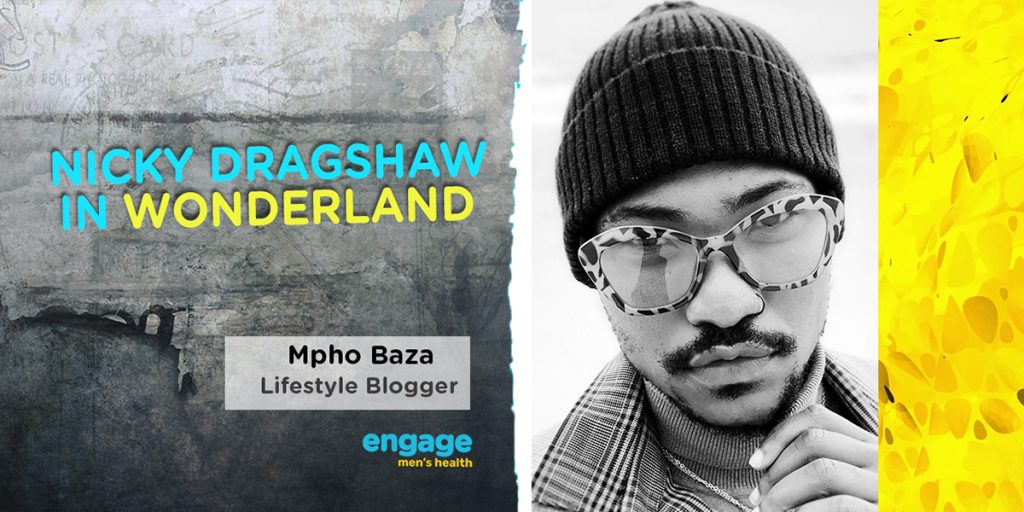 “Dear culture, oh, culture… A dream! An out of body experience! How snow goes up my nose, into my brain and makes all my sexual fantasies come true!”, I thought.

The intense association with drugs and sex started just after my much-failed marriage – where I gave up my career for a man who promised me the world, the moon and all the stars above. The Prada, YSL, Gucci and all things refined had a girl orgasm. A twist of fantasy overriding the real world. A fascination of all the possibilities of what once was imagined, manifesting itself into reality.

Now let us take you back way in time and give you a feel and an origin. “Who am I?” This queen – Nicky DragShaw – comes from a humble beginning; based in the east of Johannesburg, a middle-class queer child, who had witnessed both light and darkness at their highest frequencies.

With that said, let’s dive back into my first experience with drugs and sex. It ignited a feeling neither imagined nor explainable. After leaving who I thought was the love of my life, my soul couldn’t help but crave further exploration of what life could offer, and the idea was the Mother City (Cape Town, baby)!

On my arrival, I had nothing but a dream and a bit that I saved, and girl I do mean a bit. I started hopping from one spot to the other. I was exploring, learning, discovering; and in all these new experiences, my powdery friend was a part of the journey. Almost like ‘she’ was following me everywhere I would go; private parties, hook-ups, clubs, pubs, bars, etc. (“Snowy” I called my powdery friend). Oh she made me feel like I could conquer the world, blinding me from all realities. Sexual desire was the ultimate power, Lilith was alive and DragShaw had left the room.

How they touched me in volumes! Deeply seeding me and instantly making me feel wanted. Shortly after, it took what was most precious and left me with nothing but a soulless feeling. I could not help but wonder if the darkness and white lines had both befriended me!

“Lights, camera, action” to an unscripted Telenovela horror became my reality. Couple hook-ups and dinner dates with Elite Singles (from all over the world) became a norm. Oh, baby! Let’s not forget the orgies and the sex parties! My powdery-gram friend gave me all sorts of ideas, imaginations and satisfaction that were once non-existent. It was almost like a biblical reference to a story I read in the Holy Book – you know, the part where evil was cast into a pig. I felt that reference was a very big part of my life at that point and this cycle needed to stop at once.

When my mind would sober up, an electric shock wave would hit my body and fear would be the ruler. There I was, “NickyDragshaw” running in and out of the clinic yet again, like a New Yorker looking for a cast on Broadway. The thrill was something of a soundtrack from the Lana Del Rey “Born to Die” album (“Carmen” to be a bit more specific) – live fast, die young and leave a good-looking corpse.

Being fresh meat in beautiful Cape Town, they couldn’t get enough! DragShaw was finally in Wonderland! … “Bottoms up and top my glass full” became not only my language but a lifestyle.

One had to drastically stop and look at the reoccurring patterns of this midnight-blue influenced life, filled with gorgeous crystallized white lines, high fashion and champagne, and figure out how to turn that into an illuminating light that one can’t live without. What is my true purpose in life?

I channeled the hurt and the pain into dreams and goals. Girlfriend, without the insight and the support from EMH, I cannot help but wonder how life could have turned out for me.

I went from having conversations with the staff to becoming their digital marketing consultant, and to being a part of the process of shining a light onto Africa and onto the world (on the importance of having a healthier sexual life). And to right here, right now: sharing the most treasured and untold stories from my personal experiences. It’s almost like that whisper I had heard had it all mapped out for me. “Be the change you want to see and engage for a change!” has become my new narrative.

As “Gossip Girl” would say:
“You know you want me… XOXO!”

These are the writer’s views, which may or may not reflect those of Engage Men’s Health and its affiliates. Engage Men’s Health offers free and confidential sexual health services to gay, bisexual, and other men who have sex with men (MSM) in the Johannesburg, Nelson Mandela Bay and Buffalo City metros. Services include free HIV and other STI testing and treatment and free PrEP, which prevents HIV. Call or WhatsApp us on 082 607 1686.