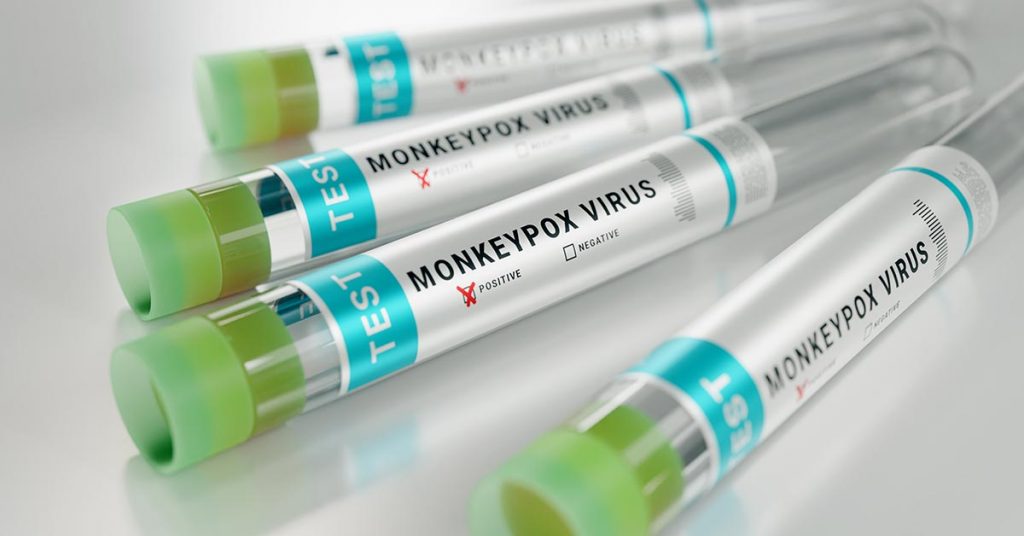 The news that a South African man has been diagnosed with monkeypox led to much confusion, misinformation and stigmatisation on social media. To set things straight, here is everything you need to know about monkeypox, including the symptoms and how it’s spread.

Monkeypox is caused by infection with the monkeypox virus, which is one of the more than 80 poxviruses known to science. The virus is harboured by different animal species and may spill over to people when there is sufficient exposure.

2. Where does monkeypox occur?

Monkeypox was first discovered in 1958 in Denmark when two outbreaks of a pox-like disease occurred in colonies of monkeys kept for research, hence the name ‘monkeypox.’ The first human case of monkeypox was recorded in 1970 in the Democratic Republic of Congo. Monkeypox is endemic (or naturally occurring) in countries in central and western Africa. This is attributed to the fact that it is naturally harboured by animals that are found in this part of Africa. Monkeypox infections in humans occur in these countries although at a relatively low level.

3. How common is monkeypox among people outside of central and western Africa?

There was an outbreak in the US in 2003 related to the exotic pet trade. In addition, cases of monkeypox have been reported in Israel, Singapore and the United Kingdom. On 13th May 2022, the World Health Organization (WHO) was notified of two laboratory-confirmed cases and one probable case of monkeypox, from the same household, in the United Kingdom. Since then the disease has been detected in several European countries, the USA and Australia. On 22 June 2022, the National Institute for Communicable Diseases (NICD) confirmed that a 30-year-old man living in Gauteng, South Africa was infected with the virus.

4. How is the monkeypox virus transmitted?

Monkeypox virus can be transmitted to a person upon contact with the virus from an animal, human, or materials contaminated with the virus. Entry of the virus is through broken skin, respiratory tract, or the mucous membranes (eyes, nose, or mouth). Persons are most likely to be exposed to monkeypox through contact with an individual that is already sick with monkeypox. Person-to-person transmission involves close contact with an infected person or materials that have been contaminated by an infected person.

5. Are gay, bisexual or other men who have sex with men (MSM) more at risk of monkeypox?

While several cases in the latest outbreak of monkeypox were diagnosed among men who have sex with men (MSM), anyone, no matter their sexuality, is equally vulnerable to monkeypox if they have had close contact with someone infected with the virus. Health experts and organisations have condemned any efforts to blame, shame or stigmatise MSM concerning the monkeypox virus.

6. Can you get monkeypox from sex?

Even though it is not considered a sexually transmitted infection (i.e. it doesn’t only spread through contact with bodily fluids, but also through contact with the skin rash), monkeypox can spread during intimate physical contact between people. This contact can happen when you have sex, including:

Anyone – regardless of gender identity or sexual orientation – can catch monkeypox if they have close contact with someone infected with the virus.

7. What are the signs and symptoms of monkeypox?

The incubation period (time from infection to symptoms) for monkeypox is on average 7−14 days but can range from 5−21 days. Initial symptoms include fever, headache, muscle aches, backache, chills and exhaustion. Within 1-3 days of onset of disease, blister-like lesions (a rash or sores, pimples or blisters) – very much the same as chickenpox – will develop on the face and the extremities, including the soles of the feet and palms of the hands. The lesions may however occur on other parts of the body. The number of lesions will vary and not all lesions will be at the same stage of development. The lesions progress through several stages before scabbing over and resolving. Most cases resolve within 2-3 weeks of onset without side effects. It’s very rare for someone to die from monkeypox, but children, pregnant women, and individuals that are immunocompromised are most at risk.

8. When is a monkeypox-infected person no longer contagious?

An infected person is contagious from the onset of the rash/lesions through the scab stage. Once all scabs have fallen off, a person is no longer contagious.

9. How is monkeypox diagnosed?

Monkeypox is diagnosed by a healthcare worker. The rash would be the most telling sign. However, many other diseases, such as chickenpox, may cause similar rashes and are more common. Samples can be tested at the National Institute for Communicable Diseases to confirm a diagnosis of monkeypox.

10. How is monkeypox treated?

11. How can monkeypox be prevented?

The spread of monkeypox can be stopped by tracing the people that an infected person has been in contact with.  Anyone that develops the disease should isolate to avoid spreading it.

12. What should you do if you think you have monkeypox?

It is important to seek medical attention promptly if you are suffering from a rash and you think you may have monkeypox. There are many other causes of rash, many of which can be treated and any discomfort or pain you may be experiencing may be addressed. It is also important to diagnose monkeypox promptly to aid in the efforts to contain the transmission of the virus and avoid more cases from occurring.

13. Where can I find more information?