Homonormativity: Is it hurting us? 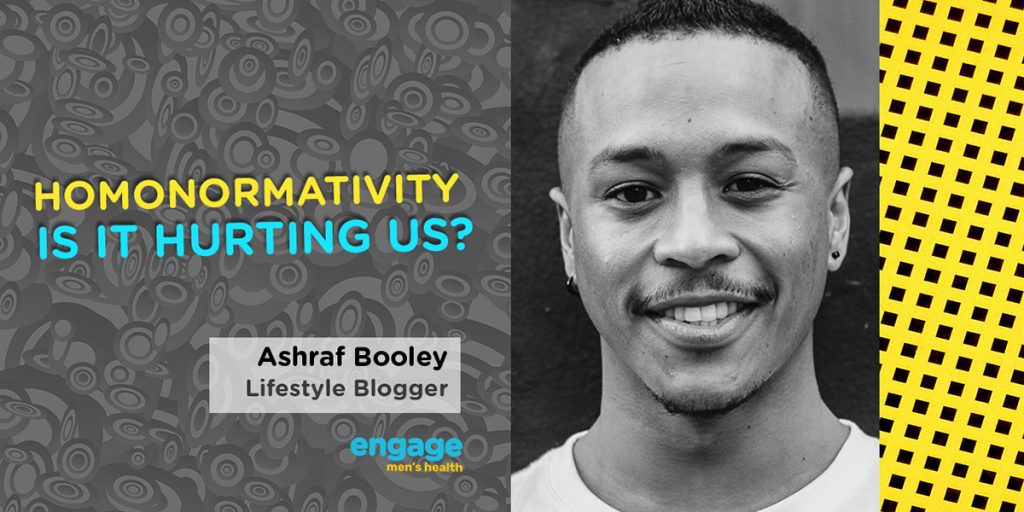 While there are a plethora of critical issues that we continue to be burdened with as the LGBTQ community, we also need to face our internal struggles and address the adversities in our backyard if we are to ever truly progress, heal, and dismantle homonormativity.

We have conquered many a battle in the fight for civil rights in the LGBTQ community. South Africa in particular, is hailed for leading the way in the fight for LGBTQ rights on the African continent. From being the first country in the world to outlaw discrimination based on sexual orientation to being the fifth country in the world to legalise same-sex marriage, we have made tremendous progress despite the stark contrast between written laws and lived realities.

As we become more visible in this deeply heteronormative society, we are expected to assimilate by conforming to the ideals of heteronormative institutions to gain acceptance from mainstream society. It is the resounding voice that tells us “We will tolerate you as long as you behave and conform to our norms”. This is also known as homonormativity, in which we mimic heteronormative ideals and constructs onto queer culture and identity. And it is hurting our community more than we care to realise.

As a cis queer person of colour who was raised Muslim, I have had a distinct lack of LGBTQ role models to look up to, especially ones who look like me. In many ways this has led to me, too, performing homonormativity. And as you can imagine, I have been subjected to multiple forms of oppression that cut across race, religion, and sexual orientation. So, it was only natural that I felt an increased desire to be accepted and to not be ‘othered’ any further.

I vividly recall — after ‘coming out’ more than a decade ago — being told by my mother that my feelings towards other men are simply a phase. A desire that is not permitted in our religion. It took years before she accepted me for who I am, but even then, I was put into a box, and under a microscope. It was soon after my ‘coming out’ that I started painting my nails black, wearing eyeliner, and decidedly odd fashion. This cheeky display of irreverence not only raised a few eyebrows, but my gender expression was also policed in every space I entered: from home and school to mosques and society at large. One example is at my brother’s wedding in 2012, whereupon entering the mosque, I was reprimanded by the Imam for wearing earrings. I was explicitly told that men are not supposed to wear “women’s accessories” and if I hadn’t removed them, that I would not be allowed to enter “his” mosque. I obeyed, not because I wanted to, but because I did not want to put a damper on my brother’s special day.

While homonormativity can be considered a double-edged sword, it privileges only those who assimilate into heteronormative structures and conform to the binary gender roles. This is what ultimately riles up the hornet’s nest. In the past, I have been guilty of using subterfuge to fit in and gain acceptance, especially in the workplace. Due to fears of judgement and persecution, at times we “closet” ourselves and police our own identity in certain social settings.
But the main problem with homonormativity is that it has trickled down into queer culture and is subsequently hurting our community. It is evident in the “no fats, no femmes, no blacks” prejudice that is often displayed on the queer dating scene, masquerading as “preference”. This ultimately limits inclusion and negatively impacts social cohesion in the LGBTQ community.

You merely have to flip through Netflix to find further examples of homonormativity. Just look at how cis gay white men dominate queer TV representation. Homonormativity manifests in every aspect of queer life and is particularly troubling in that it causes the oppressed to oppress. Think about how we tend to focus on gay rights but are not doing nearly enough to fight for the rights of the trans community. Homonormativity even spills over into the bedroom, dictating who should be top and who should be bottom, often purely based on gender identity.

We must be subversive and reject notions that insist we assimilate into heterosexual ideals. Being queer presents us with a unique opportunity to kill two birds with one stone: dismantling heteronormativity and homonormativity at once.

Ashraf Booley is a contributing writer for Engage Men’s Health. These are his views, which may or may not reflect those of Engage Men’s Health and its affiliates. Engage Men’s Health offers free and confidential sexual health services to gay, bisexual, and other men who have sex with men (MSM) in the Johannesburg, Nelson Mandela Bay and Buffalo City metros. Services include free HIV and other STI testing and treatment and free PrEP, which prevents HIV. Call or WhatsApp us on 082 607 1686.