HIV status: to disclose or not

September 21, 2020 Lebogang Mogale News Comments Off on HIV status: to disclose or not 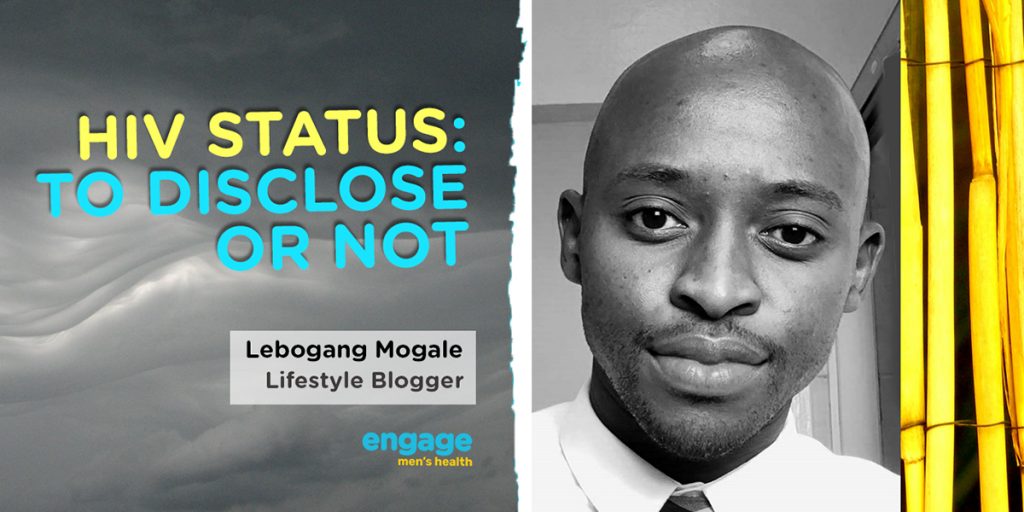 One would think that the most significant health challenge is finding out that you are HIV positive because of perpetuated stigma. I remember in the early 2000s learning that HIV cannot spread through the sharing of cutlery. Recently we have also come to learn that people with an undetectable viral load cannot pass HIV onto a sexual partner. Even with this ground-breaking research, disclosing one’s status remains a treacherous ground.

I must say, life was easier when the only thing that crossed your mind at the mention of disclosure was anything but the state of your health. Now it fuels anxiety, and sometimes I feel like we are a cough away from soliciting people’s medical records because we have become such a curious and entitled society. A lot of us would like to believe that we are progressive because we read, throwing shade such as ‘Read! A bottle label, a book cover or something, but just read’ suggesting that your noise lacks depth. The problem is, how much of what we read and of what we are aware of, do we use to ostracize and further drive the stigma around living with HIV? This is for the textbook narcissists at the back.

I have learned that disclosure is not even the multi-neon-colored elephant in the room, but how people react and start projecting stereotypes when they find out that you are living with the virus. It is how a one-night stand from a club or Grindr, turns into a lesson of “When”, “How” and “How many”.

To the oblivious, you become seen as someone who can possibly pass on the virus by merely breathing and being within the same space with someone who is not living with the virus. These do not even scratch the surface but are enough to have someone pull their pants straight up. A few dates into seeing someone who ticks a lot of the boxes –and not all boxes because you have to lower your expectations when it comes to dating these days, great sex and conversation that run deeper than any trauma you have already suffered because being gay, you decide to disclose your status. Before you can add anything else, you are labelled irresponsible and inconsiderate, because sex is not a two-way street, right?

It is not between two, or more (because group projects are always fun) consenting adults who are supposed to take the necessary measures to protect each other and themselves, but this is rather seen as the positive person’s responsibility, and if you find yourself agreeing with the latter, we are going to need more wine because did you know that an undetectable viral load means you cannot transmit the virus? U=U? You are welcome.

Nonetheless, it should never be the sole responsibility of the person living with the virus to run a marathon before coitus, and recently I have had the pleasure of working with someone living with the virus, and he assured me that life was roses and sunshine despite people trying to make thorns out of it, he also mentioned that he never experienced any stigma since he learned of his status.

‘Progressive’ does make you sound well-informed when thrown into a conversation while holding your teacup with your pinkie out. Still, a lot of the progressive have very little to no concern as to who has been there.

Stigma is only perpetuated by the few who have not done the work and feel entitled to know the health status of others just so they can throw protection to the wind. Still, in the same light, it is everyone’s responsibility to know their status and help curb the spread, and this does not start at disclosure but knowing your status.

Unfortunately, HIV/AIDS has been labelled as a hornier devil because of how it is commonly spread, even with the long list of other sexually transmitted diseases. We want and expect people to disclose their HIV status but have little regard to unlearn and let go of internalized stereotypes which become more apparent every single time we engage. All the gay people in me are tired of this ill-informed narrative.

Never feel compelled to disclose, prep it, wrap it, get your rounds and go.

Lebogang Mogale is a contributing writer for Engage Men’s Health. These are his views, which may or may not reflect those of Engage Men’s Health and its affiliates. Engage Men’s Health offers free and confidential sexual health services to gay, bisexual, and other men who have sex with men (MSM). EMH is in Johannesburg, Nelson Mandela Bay and Buffalo City. Our services include free HIV and other STI testing, treatment, PrEP and PEP. WhatsApp message or call us on 082 607 1686.